About 160 participants from 28 countries met in Hungary for practical training, resources and networking. It has been the most attended Refugee Highway Partnership Roundtable so far. 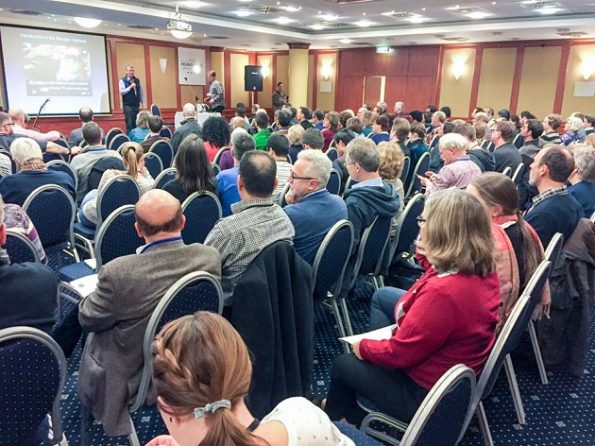 “We have had an emergency, but God wants us to be prepared for the long haul”, Patrick Johnstone (author of Operation World) and plenary speaker said as 160 people from 28 countries gathered in Budapest (Hungary) for the 2017 Refugee Highway Partnership European Roundtable on February 6-10. “More than two-thirds were first time participants!” Paul Sydnor (EU director of the International Association for Refugees) reported, “this was our largest roundtable since we began fifteen years ago.”

The week started on Monday evening with introductions and updates. After breakfast each day, attendees gathered for worship, a devotional, and messages from Patrick Johnstone who reminded participants that God is answering the prayers for revival by bringing the nations of the world to the doorsteps of Europe.

A break followed where people could browse the plethora of materials offered in the resource room while sipping Bulgarian coffee.

Time was allowed in the schedule for each participant to choose five from the array of twenty-six different workshops offered in the mornings and afternoons.

Just a few examples of workshops were: “Reaching Refugees through Media”, “Human Trafficking”, and “Language Learning for Integration.” After discussions around the dinner tables, we gathered in the evenings for panel discussions, reports, and testimonies from more than fifteen different places and people around Europe.

Many people enjoyed the prayer walk through Budapest, the tour of the second largest Synagogue in Europe, and the day trip to visit refugees on the Serbian border. The week ended on Friday morning with an invitation to next year’s event in the Netherlands.