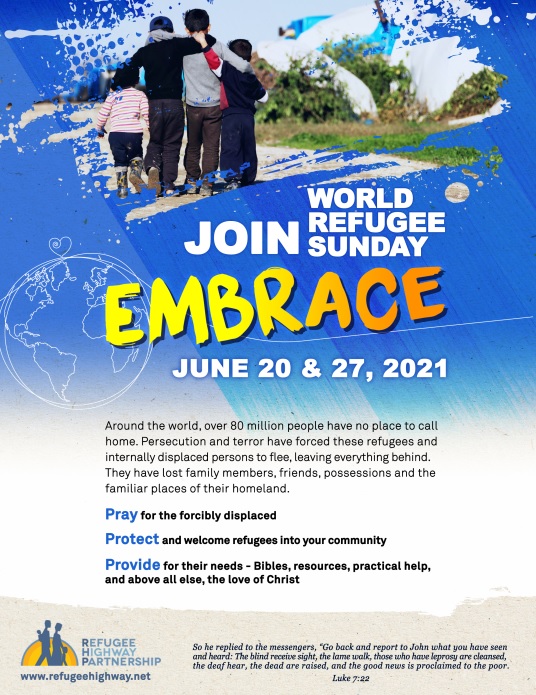 World Refugee Sunday is a wonderful opportunity for local churches, small groups and others to demonstrate their common concern for the welfare and protection of the world’s forcibly displaced people. WEA partners and the Refugee Highway Partnership (RHP) have developed the resources on this site to help you promote and observe this important day. Under the theme “Embrace”, this year’s World Refugee Sunday focuses on the Christian calling to embrace those excluded, just as Jesus received the excluded.

We also encourage you to use the #WorldRefugee Sunday and #RefugeeHighway to share what you are doing, in order to encourage and inspire others to join in.

On World Refugee Sunday would your church consider highlighting the challenges daily faced by refugees; and what it means to welcome the stranger?

The European Evangelical Alliance, have produced a 30 minute film entitled ‘The Peace Between’. ‘The Peace Between’ is a short, professional film featuring 3 friendships between a European and an asylum seeker, or refugee.  Find out more info and resources in our Church Pack or go to: www.peacebetweendialogue.com

Let us unite together as the Body of Christ to welcome over 65.6 million men, women and children who have been forcibly displaced.